Fifteen fuel cell trucks will be operated and tested in eight deployment sites: Antwerp in Belgium, Amsterdam, Breda, Groningen, Noordenveld and Helmond (operated by SUEZ ) in the Netherlands, Bolzano and Merano (operated by SEAB SPA and ASM Merano-Stadtwerke Meran) in South Tyrol, Italy and Gothenburg (operated by Renova) in Sweden.

The vehicle manufacturing partner, E-Trucks, will integrate European fuel cell systems from three suppliers into its existing electric truck platform, doubling its operational range and allowing it to meet the demanding duty cycles of European waste operators in real-world, day to day urban waste collection activities. The aim is to trial 15 high performance fuel cell refuse trucks in a normal operating environment in 8 deployment sites for at least two years. The 15 trucks will be operated by the usual waste collection fleet operator for the city in question, which is either the city authority itself, or a private waste contractor. Moreover, these vehicles will be operated on a daily basis along equivalent duty cycles to conventional diesel based trucks, performing back-to-base missions every day. The vehicles will be operated for at least 24 months, but some will be operated for up to 34 months. 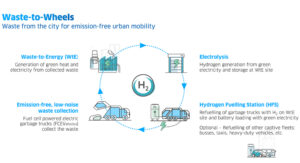 After 2.5 years of truck design, manufacturing and production, the Tractebel-coordinated ‘Refuse Vehicle Innovation and Validation in Europe’ (REVIVE) demonstration phase is now underway. A total of 15 custom-built hydrogen fuel cell […] 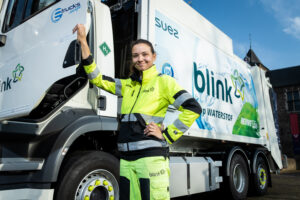 “The hydrogen truck makes it better for everyone!”

Who? Driver Nathalie Leenders. What: A first! – The first hydrogen truck for Suez (now ‘PreZero Nederland‘) and its partner […] 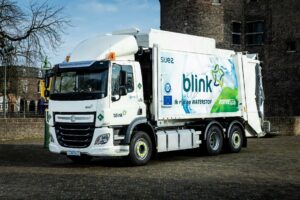 Sustainable waste collection in Helmond region about to begin

SUEZ Recycling & Recovery Nederland, a specialist in waste and raw materials management, is participating in the REVIVE project. In […]