Why hydrogen and fuel cells?

International energy forecasts promise a bright future for hydrogen as an energy carrier. When produced sustainably, hydrogen offers a variety of advantages:

Fuel Cell and Hydrogen (FCH) technologies hold great promise for transport applications from the perspective of meeting Europe’s environmental challenges. The European Union is committed to transforming its transport as part of a future low carbon economy. It is recognised that FCH technologies have an important role in this transformation and they are part of the Strategic Energy Technologies Plan (SET) Plan adopted by the European Council. This is in line with the European Commission’s (EC) Communication ‘Energy for a Changing World – An Energy Policy for Europe’, the goals of the Lisbon Strategy and the European Strategic Transport Technology Plan. Fuel cells, as an efficient conversion technology, and hydrogen, as a clean energy carrier, have a great potential to contribute to addressing energy challenges facing Europe. They will allow renewable energy technology to be applied to transport. 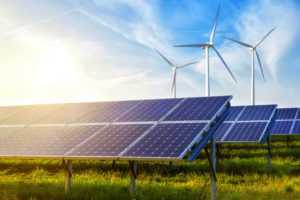 The sustainability of hydrogen depends on the manner in which it is produced. At present, the industrial world uses 500 billion cubic metres (m3) each year as a raw material for production purposes. However, the majority of this hydrogen is produced by reforming natural gas.  Sustainably produced hydrogen is created by the process of electrolysis using wind or solar energy.

What is a fuel cell?

A fuel cell is a device that converts chemical potential energy (energy stored in molecular bonds) into electrical energy.

A PEM (Proton Exchange Membrane) cell uses hydrogen gas (H2) and oxygen gas (O2) as fuel. The products of the reaction in the cell are water, electricity, and heat. This is a big improvement over internal combustion engines, coal burning power plants, and nuclear power plants, all of which produce harmful by-products.

Since O2 is readily available in the atmosphere, we only need to supply the fuel cell with H2which can come from an electrolysis process (see Alkaline electrolysis or PEM electrolysis). 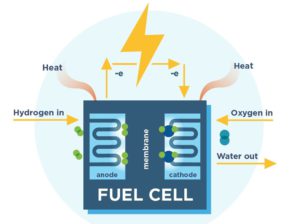 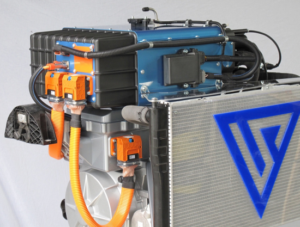 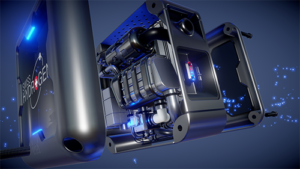